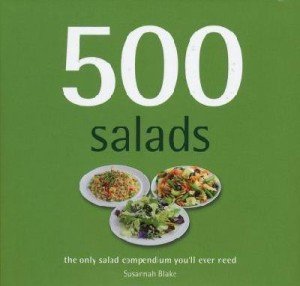 During a recent council hard rubbish clean up I came across a little square cookbook called 500 Salads. It was tossed out with a huge pile of food magazines and cookbooks which must have been the result of someone’s kitchen spring clean. After initially wondering why it wasn’t all placed in a recycling bin, I decided that one cook’s trash is another cook’s treasure and took them home.

I’m rather suspicious of any cookbook which contains hundreds of recipes because in my experience, anthologies such as this can be a case of quantity over quality as publishers bring out books they hope will sell because they contain anything and everything. In reality many of them are badly written recipes with little or no testing which usually ends with frustration in the kitchen as home cooks try to figure out where they went wrong. However for the sake of this exercise I decided not to jump to any conclusions and thought it best to look up the author and try out some of the recipes.

Susannah Blake is a cookbook writer who has written over fifty books and has a series of “500” cookbooks covering a variety of subjects including cupcakes, cookies, soups and more. Her books have been around for some time and they do appear to sell well, particularly to novice cooks so it’s great to see she’s inspiring people to cook and try new things. This particular cookbook has salad recipes ranging from the very simple to the more elaborate, with a lot of well known salads in addition to more obscure ones. It might also be worth mentioning however that the book doesn’t contain 500 actual recipes, instead it contains 125 recipes with four variations of each.

I find it intriguing that the original owner threw the book out (I would have loved to ask why). The inside front cover has a note, presumably from a spouse or partner who liked the book enough to buy it as a gift. It says “Happy birthday Wonderful, love you xxx page 93 please” and it is dated 24/11/09. The aforementioned recipe is a warms goats cheese and spinach salad which looks to be a small wheel of goats cheese placed on a piece of toasted bread with bacon and spinach, drizzled with oil. I wonder if the receiver of the book ever made the recipe?

(Above pic: the note on the inside cover.)

I decided to make three recipes from the book and chose the ones which appealed to me the most. The first is an Insalata Trevigiana (a traditional Italian salad from the Italian province of Treviso containing radicchio, walnuts and gorgonzola cheese). The second is an Asian inspired sweet & sour cucumber and onion salad with chilli and the third a Mediterranean fruit salad with spices and pistachios. I did however feel the need to tweak the recipes, as after testing them I felt that even though they had a lot of potential, they needed more work. I have noted these changes below.

When I first saw the photograph of the Insalata Trevigiana I thought it to be a red cabbage coleslaw and nearly went past it until I read the recipe title and list of ingredients. I decided to add witlof (Belgian endive) for further crunch and contrast. My initial thought when I made up the dressing was that it was too sweet but when paired up with the bitter salad leaves it worked perfectly. The small pieces of gorgonzola and scattered walnuts make it a salad you could easily serve at a dinner party and the flavour combinations are delicious.

Cut off the fennel leaves and reserve for the garnish if you wish to use them. Wash the bulbs, remove the hard core and cut the bulbs into thin strips (I cut mine super thin so they were wispy). Place in a serving bowl. Wash and trim the radicchio, shred (I tore mine into larger pieces) and add to the bowl. Take the witlof and cut off the bulb end then carefully open up the leaves, add to the bowl. Add the chopped walnuts and diced gorgonzola cheese to the bowl.

Make a dressing from the oil, lemon juice, white balsamic, honey, salt, black pepper and parsley by combining in a bowl and whisking. Pour over the salad just before serving.

The second salad needed a bit more work mainly because the ratio of ingredients in the sweet and sour cucumber salad didn’t sound right. I felt one cucumber to one whole onion to be too much. I used three cucumbers, only a quarter of a red onion and added a finely sliced green apple. The result was a delightfully fresh crunchy sweet and sour salad with a great Asian flavour.

Peel the cucumbers, halve lengthways, scrape out the seeds with a teaspoon and slice the cucumber. Place in a bowl with the onion and apple.

Make a dressing from the oil, cider vinegar, honey, chilli flakes and salt by combining in a bowl and whisking. Pour over the salad just before serving. Scatter coriander leaves over the top.

The third recipe, the Mediterranean fruit salad was the best of all three. I followed the original recipe and my only change was to add a drizzle of sweetened pomegranate molasses at the end as it cut through the acidity of the lime and balanced the dressing. This salad is perfect for breakfast with plain Greek yoghurt or even as a refreshing dessert after an Indian or Middle-Eastern meal.

Wash and halve the grapes lengthways and remove seeds if required. Cut the figs lengthways into bite sized pieces. Wash the pear, remove the core and cut into thin slices. Remove the pits from the dates and cut into small pieces. Cut the grapefruit into segments (if unsure how to do this check out this video).

Place the cut fruit into a serving bowl. Whisk the spices with the freshly squeezed lime juice, then pour the dressing over the fruit. Toss well to combine. Drizzle with the pomegranate molasses and sprinkle with pistachios. Serve immediately.

The verdict: the book is a good source of inspiration for the inexperienced cook and it will certainly get you started on the road to creating good salads. Feel free to make changes, particularly for the salad oils the author suggests. In many of the recipes olive or grapeseed oils will work far better than the canola oil suggested so often. Will I keep it? No. I believe I picked out the three best recipes for myself which I will definitely make again but I don’t feel I’ll use any of the others. Overall a good resource for beginner cooks and I’m sure whoever finds it at Vinnie’s will love it. Godspeed.

Adapted from 500 Salads, The Only Salad Compendium You’ll Ever Need by Susannah Blake.

Following a moody green and dark wood theme I found most of the props at the local Goodwill. The large green plate in the Insalata Trevigiana shot is simply a cheap Chinese made oversize dinner plate teamed up with a vintage napkin and vintage Eames-era Lundtofte Danish servers. I was ecstatic when I found them at Crows Nest Vinnie’s as they are a collectors item so I gave them a good clean and oiled up the handles to restore them. The Asian cucumber salad shot is on a vintage Johnson Australia plate and the fruit salad is on a vintage plate originally intended to be used as a decorative wall hanging, everything else is bits and pieces from op shops. The background is an old piece of veneered timber found in hard rubbish in my local area and painted with a walnut stain.

6 thoughts on “The Cookbook Archives: 500 Salads by Susannah Blake”